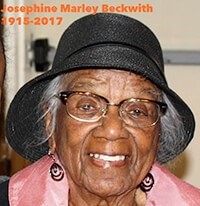 Josephine Marley Beckwith, a true inspiration at YWCA, holds many firsts in the area. She was the first employee of African descent at YWCA of Alton and the Olin-Mathieson Corp. She was the first president of the local National Council of Negro Women. She was recognized for her many efforts as a civil rights pioneer, educator, mentor and a community organizer. As a result of her many contributions, Josephine Marley Beckwith was recognized as the YWCA of Alton Woman of Distinction in 2002.

Beckwith believed in the value of volunteering and community involvement. In addition to her work with the YWCA, she worked with the River Bluffs Girl Scout Council, Lewis and Clark Community College, the Oasis Women’s Center Pre-Employment Training Program, the National Council of Negro Women, and the Elijah P. Lovejoy Memorial. She was especially noted for her efforts to educate and enfranchise all people, particularly through her work with the Alton school system desegregation committee, culminating in the establishment of the first kindergarten for black children in Alton and passage of the bond issue for a new Central Junior High School in 1945.